The Sisters of Life will celebrate the 100th birthday of their late founder, Cardinal John O’Connor, on Jan. 15 with an evening of prayer, reflection and thanksgiving in several major cities.

“We will gather—in New York, Philadelphia, and Toronto—to celebrate his life in prayer and thanksgiving,” Sister Maris Stella told CNA Jan. 14. “It’s a moment for us to thank God for the gift of Cardinal O’Connor’s life. We are grateful that God chose Cardinal O’Connor to found our community. We are grateful that he responded to God’s grace and for the sacrifices he made to make our vocations possible.

O’Connor was Archbishop of New York from 1984 until his death on May 3, 2000. He was a major figure of American Catholicism and an outspoken advocate for the unborn and for other pro-life issues. In 1991 he founded the Sisters of Life, a contemplative, active Catholic community of women who profess vows of poverty, chastity and obedience, plus a fourth vow to protect and enhance the sacredness of human life.

The sisters’ mission involves service to women who are vulnerable to abortion. This includes giving them the support and resources they need to choose life, their website says. They also aim to help women who suffer after abortion to find God’s mercy and healing, and they host weekend retreats and engage in evangelization. 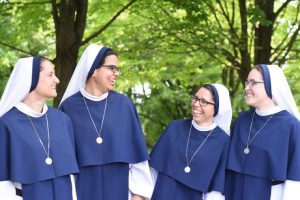 For Sister Maris Stella, Cardinal O’Connor was “a great patriarch and prophet of the pro-life movement.”

She credited the Sisters of Life’s origin to O’Connor’s 1975 visit to Dachau, the site of a concentration camp under Nazi Germany where thousands of people, both Jews and Christians, were tortured and murdered. There, the clergyman had “a profound spiritual experience” and promised to do everything he could to protect life, she said.

After years of apparent lack of results, he brought these failures to prayer and realized the world needed a spiritual response to a “culture of death” that is rooted in “a deep crisis of faith,” she continued.

In a widely-republished article in the newspaper Catholic New York, headlined “Help Wanted: Sisters of Life,” O’Connor described “his vision of a religious community of women who would give them themselves fully to the protection and enhancement of the sacredness of every human life, beginning with the most vulnerable.”

“He was very much a father to us,” Sister Maris Stella told CNA. “Despite his many responsibilities as the Archbishop of New York, he spent a great deal of time with the community and spoke to us about his vision. He preached two retreats a year for the sisters and would visit regularly. He knew each Sister and would spend time with the community on a regular basis, coming to the convent for Mass and dinner.”

“He was a man who loved the Church and the Eucharist, with his whole being,” she added. “His heart was conformed to the Heart of Christ, which gave him the clarity of vision to see each and every person as an icon of the living God. He was passionate about the dignity of the human person. He believed deeply in God’s redemptive work in souls and would speak powerfully about God’s mercy. He was full of humor and dry wit, and he relished life.”

In New York, the sisters will mark O’Connor’s Jan. 15 birthday at St. Patrick’s Cathedral, where Bishop Edmund Whalen will celebrate Mass at 5:30 p.m.

Afterward, Mother Agnes Mary, S.V., the General Superior of the Sisters of Life, will give a reflection. The night will conclude with a Holy Hour in thanksgiving for Cardinal O’Connor’s life, with the Sisters of Life providing music.

In Cardinal O’Connor’s hometown of Philadelphia, the evening begins with a 6 p.m. Holy Hour at Philadelphia’s Cathedral Basilica of Sts. Peter and Paul. Auxiliary Bishop John J. McIntyre of Philadelphia will celebrate a 7 p.m. Mass, with a reception to follow in Drexel Hall.

The Sisters of Life established their convent in Philadelphia in 2017 at St. Malachy’s Parish in North Philadelphia near Temple University.

In Toronto, the Sisters of Life will commemorate the late cardinal with a 7 p.m. holy hour several days later on Jan. 23 at St. Peter’s Church, across from the Bathurst subway station.

There are now more than 100 members of the Sisters of Life. In addition to their seven convents in the New York area, including in the Diocese of Bridgeport, they serve in the Denver, Toronto and Washington archdioceses. Their religious institute was formally approved in 2004.

Cardinal O’Connor was born in southwest Philadelphia on Jan. 15, 1920. He was ordained a priest for the Philadelphia archdiocese in December 1945 and later spent 27 years as a U.S. Navy chaplain, including a period as a senior chaplain at the U.S. Naval Academy. Before his retirement from military service, he rose to the rank of rear admiral and Chief of Chaplains of the Navy.

Sister Maris Stella, herself a Naval Academy graduate and a former naval officer, has been researching the cardinal’s life and his time in the Navy, she told CNA. Her work has included interviewing those who knew him.

Baba U Too Much (Remix) by D Jaze ft Ludera Dave...

ABOUT US
WocaMusic is Nigeria's No.1 Gospel Music/Entertainment Website created as a means to promote and celebrate Gospel entertainment both in and outside the catholic church with features like inspirational content, News, Sermons, Response-rial Psalm, Latin Chants, Podcasts etc. WocaMusic.com is dedicated to promoting gospel content.
Contact us: music@wowcatholic.com
FOLLOW US
© 2021 WOCA Music Powered by WOWCATHOLIC.COM
MORE STORIES

My Tomorrow Must Be Greater by David Ekene Daniel – wocamusic.com